My inspiration for this quilt came from where I used to live in the city opposite an old maternity hospital 25 years ago. Just before dusk in late summer and autumn, starlings would start to gather from the local area, they would come in to gather in the trees arriving in small flocks until there were several thousand birds then it would suddenly go quiet and there would be a moment of silence before they all took off together, almost as if somebody had fired a gun at the start of a race. This group would then link up with others in the city and tens of thousands of them would then swirl around in great numbers almost like a living creature in itself. It was amazing to watch and unfortunately not something I have seen in recent years.The starling population has dropped drastically by 70% in recent years, in the UK.
I painted the background of the quilt with fabric paints and also some of the birds I then hand stitched hundreds of small birds onto the quilt before machine quilting around the flock of birds. With a traditional binding in black. 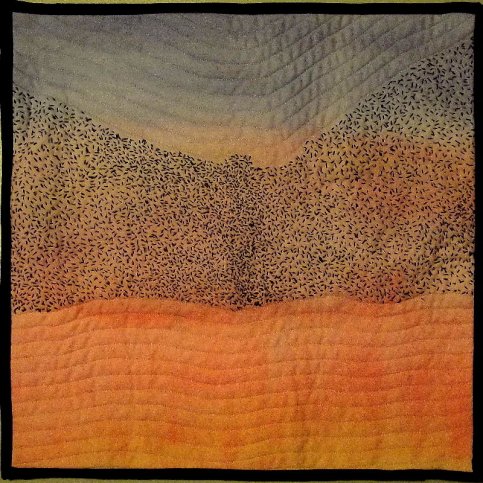