The mandrake (official name: mandragora officinarum) is a plant of the nightshade family that is common in many parts of the Mediterranean. I was thrilled to see it for the very first time last February when touring the north of Israel. It has very large dark green patterned leaves and purple flowers and grows low to the ground. The root contains hallucinogenic and narcotic alkaloids and is used to remedy a host of different ailments. Aiding desire and fertifility is also ascribed to it. The root resembles a human figure and in the past was made into amulets for luck and warding off sickness.

The plant is mentioned in the bible. Reuven went into the fields and brought mandrakes to his mother Leah. Rachel (barren at the time) pleaded with her to give her some so that she may conceive (Gen. 30:14). In the Song of Songs it is mentioned in verse 7:14, “the air is filled with the scent of mandrakes”. In the Hebrew bible the name is dudaiem and in translations the word is often left unchanged, in Dutch it is called alruinen. In one of the Harry Potter films there is an unforgettable scene of “repotting mandrakes” which really drives home the notion that the root resembles a human figure.

The quilt is made of commercial and some dyed fabrics, fused with free motion embroidery. On the left side I have stitched the Hebrew letter M (מ). 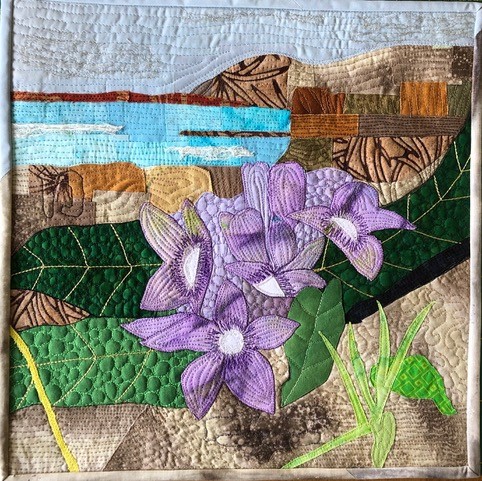