All in the Mind

Inspiration: Words and music combined with the local coastline formed the basis for this piece of work.

The sea has a music of its own and I often have tunes which turn in my head. I did some research for sea linked music and fell on the Otis Redding and Steve Cropper song ‘Sitting on the Dock of the Bay” which I couldn’t get out of my head. The song is about the Bay of San Francisco but my life is on the edge of the Bay of Aiguillon, very different but over time images came to mind. I couldn’t get the tune out of my head…

At the end of a walk one day I persuaded three friends to sit on a bench and stare out to sea, it was on the edge of a small port across the bay from home as the light was beginning to fade. The song describes the ships rolling in and out of the dock; the sea often has many shadows created by the waves and it is not difficult to let the imagination run… The word ‘ships’ evokes the idea of old galleons which tie in with the history of this area so I have created them as shadows. The lines of the music are the quilting lines and the notes are ‘v’s flying over the surface.

The fabrics used are mainly hand painted with a few commercial scraps and there is a mix of hand and machine stitching. The sea is created with two layers of cotton organdie, the ships cut in lino were printed on to the base layer and the sea is layered over the top. I have intentionally written the music in stitch with threads which are not too dominant, I wanted the music to be present but to drift across the water on the breeze. The edge has a small black cotton binding to frame the moment in time. 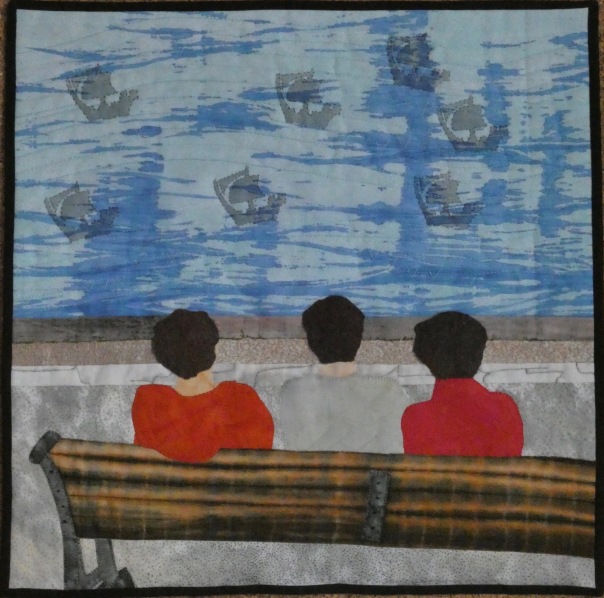