The yellow brick road from The Wizard of Oz has entered popular culture in a number of ways. The yellow brick road first appeared in the book The Wizard of Oz by L. Frank Baum (1900). It also appeared in The Marvelous Oz (1904) and The Patchwork Girl of Oz (1913.) In the book, the road is a guide for Dorothy to follow to reach the Emerald City. The Patchwork Girl of Oz features two yellow brick roads, while the 1939 film has a red brick road going in a different direction to the yellow brick road which leads to the Emerald City. According to Wikipedia there are several yellow brick roads in different areas of the USA, which may have inspired Mr. Baum to use it in the books. According to Baum’s descendants, his inspiration was a cobblestone road in Holland Michigan, where he used to spend summers. The yellow brick road has inspired a number of songs and popular expressions. Elton John’s Goodbye Yellow Brick Road is one of the best known, even though it does not reference the original road. Other artists who have incorporated the name into their songs include Eminem, and Arctic Monkeys. Lady Gaga used the lines in her song Artpop.

“And took a road to nowhere on my own

Hope my ruby shoes get us there quick”

In Yellow Brick Road, I have chosen to leave the road in a state of good repair, unlike the original book. The road twists and turns a little through poppy fields before entering the magical Emerald City. 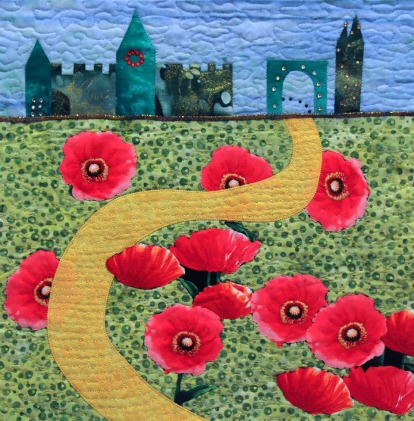