Susan Slesinger – Progress – The Royal Progress of Queen Elizabeth I

The Royal Progress of Queen Elizabeth I 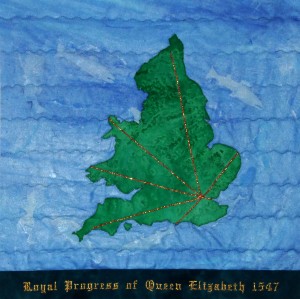 Queen Elizabeth I travelled the length and breadth of England and Wales during her reign. As head of state for England and Wales, and head of the Church of England, she used the royal Progresses for a number of purposes including building alliances, rewarding nobility, changing palaces/castles to enable them to be aired out and freshened, escaping the heat and disease of London during the summer, meeting her citizens and preventing insurrections. Just as in modern times, towns and villages were cleaned up for her visits, and ordinary citizens were excited to see her and her entourage in their elaborate clothes. The local citizenry ensured that she received a lavish welcome. Musicians and orators would provide entertainment and everything had to be perfect for her visit. Royal visits were extremely costly due to the lavish preparations, and the cost of the visit was often born by local nobility or gentry, which made the progresses less popular with nobility than with the peasants and merchants. In addition to making connections, it was thought that a sovereign had the power to heal people with her touch, so she would touch the sick. In some cases, such as her visit to Kenilworth Castle, she might remain in a place for several weeks. She travelled with a large retinue, all of whom had to be housed and fed.

This quilt depicts a “fantasy” progress, rather than a historically accurate one. The progresses started in London, which was the capital of England and Wales, and the seat of governance. The Queen’s London residence was at Whitehall, although her favourite palace was reputed to be Richmond, located a short distance from central London. (Today, Richmond is a suburb of London.)