Hollyhock House, located in the Los Feliz area of Los Angeles, was designed by Frank Lloyd Wright for Aline Barnsdall.  Ms Barnsdall asked Wright to design a house for her in 1916, even though she did not have a location for it.    In 1919 she purchased Olive Hill, a thirty six acre site on which she wanted to build the house and an arts complex including a 1,250 seat theatre.  The house was constructed between 1919 and 1921.  It was the first house that Wright designed for Southern California, and he used a style he termed California Romanza, also referred to as “Mayan”.  Ms Barnsdall’s favorite flower was the hollyhock, and Wright incorporated a stylized hollyhock design throughout the house, including on the roofline, walls, columns, planters and furnishings designed specifically for the house.

Taking advantage of the dry, sunny climate, the 17 room house and its extensive gardens provided for indoor/outdoor living, with the major rooms opening onto the gardens, and roof decks.  Frank Lloyd Wright’s son Lloyd Wright and Rudolph Schindler supervised the construction, as the senior Wright was preoccupied with work on  the Imperial Hotel in Tokyo.  Two smaller residences were built on Olive Hill although Barnsdall’s vision for a theatre was never fulfilled.  After the house was completed, she decided that it was not to her liking and she lived in House B, one of two smaller residences built on Olive Hill.  The other proposed buildings were never constructed.  In 1927, she gave eleven acres of Olive Hill, including Hollyhock House, to the City of Los Angeles as a public library and park.  The grounds are still used as a park and arts centre, and parts of Hollyhock House are open to the public.

This quilt uses a view of the house from the rear garden towards the living room.  Originally there was an indoor water feature in front of the fireplace and an outside pool. Ms Barnsdall had the indoor pool removed, but visitors can see the empty garden pool.

The house has undergone numerous renovations and repairs.  Some of them made significant changes to theappearance of the house.  The most recent renovation was completed in 2015, restoring the house close to its original appearance. 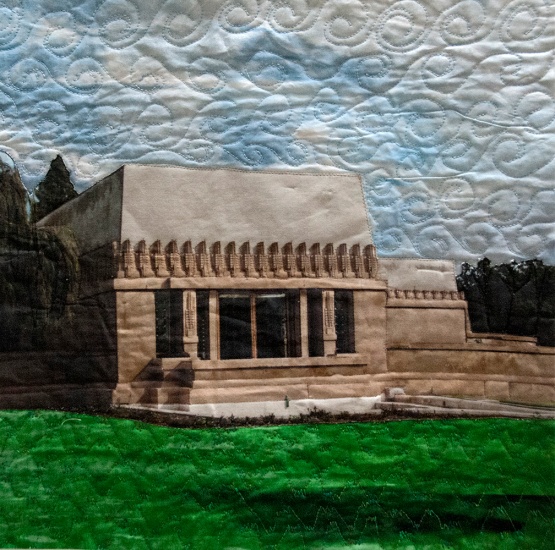 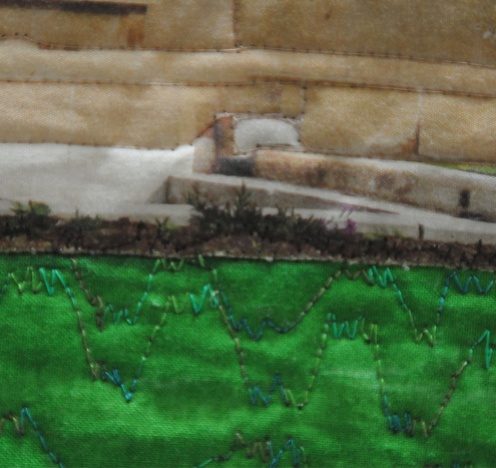 Quilts in the Series: