The first thing that comes in my mind with the architectural theme, are the stave churches of Norway, and the beautiful carvings with the braids patterns. The churches have a very specific style and appearance and are very old. A lot of information about it can be found on the internet: https://en.wikipedia.org/wiki/Stave_church

For several years we lived in Undredal as neighbors to the smallest stave church of Norway. While we were living there, all the stave churches in our department, Sogn og Fjordane, were restored, so it was a huge project, also in our little village.

I was invited by a friend from Undredal, to accompany her to the reopened stave church of Borgund, about an hour away from us. There was a nice ceremony with Norwegian costumes and  music.

The Borgund stave church is bigger than the one I  our village and has many more staves and carving patterns. I found a blueprint of the floor with all its staves, and a cross-sectional view of the church, which I used for my quilt, http://www.chapel-in-the-hills.org/architecture.html

The difficulty in this theme was the stencil. I thought I would find a stencil from a braids pattern, that I could use, but I didn’t. It had to look like the woodcarving used on the door of the Urnes stave church, also in the Sogn og Fjordane, here you can find a picture of it: http://www.sacred-destinations.com/norway/urnes-stave-church

In the end I bought a stencil that had the feeling of the woodcarving. And I found some quilt stencils with braids patterns that I used.

The blueprint is printed on thin lutrador, which I gave a little color with transfer paint. After the printing it is colored with a marker and embroidered by hand stitching. The beads stands for the staves of the church. The lutrador is machine stitched on a piece of cheesecloth, that is painted using iron, soda ash and black tea, using a double needle for the first time.

The stencil gave a problem by using it with paint. The lines are so thin, that they disappeared. After a lot of trying and experimenting with different kinds of paint, I finally made a photocopy of the stencil on thick lutrador, colored it with Inktense pencils and stitched it with hand embroidery.

The braids stencils for the quilting are both machine and hand stitched and the cloth is colored with Intense pencils too.

When I thought it was finished, I decided to make some stitches on the lutrador in the middle of the piece. That became a lot of stitches, but I like the result.

In the surrounding where we live now, are also two stave churches, Nore and Uvdal.

In this link you find all the stave churches of Norway: http://www.stavkirke.no/index.php?option=com_djclassifieds&view=items&layout=blog&cid=1&Itemid=131&lang=en 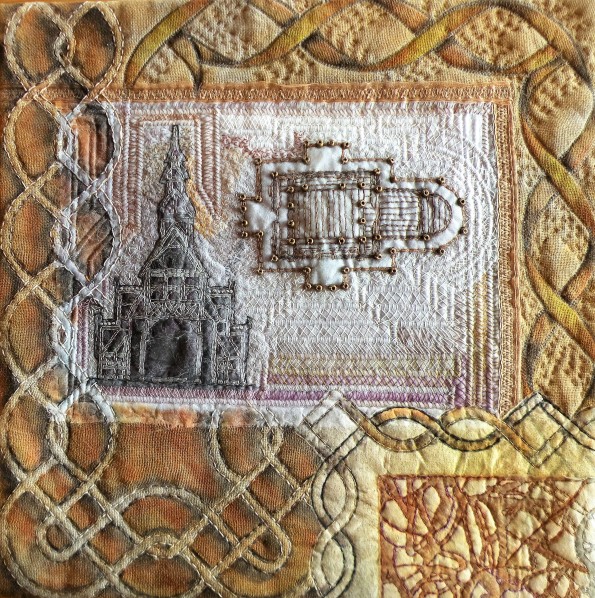 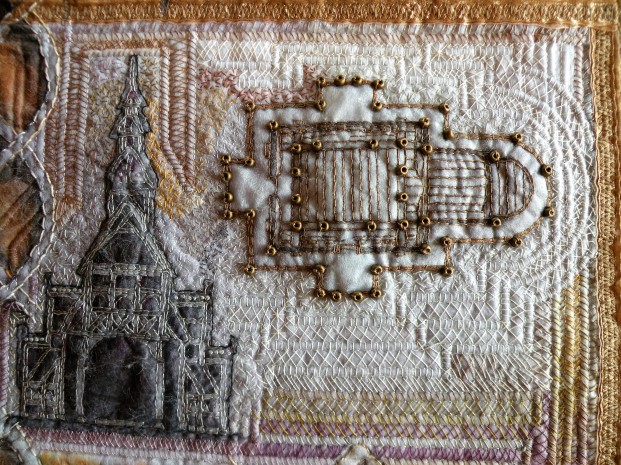