At the museum – Kibbutz HaZore’a

Rather than using Michael Kovner’s style as my inspiration, for this quilt I chose two different subjects used by him to be the inspiration. A very recent series of his is called “museum visit” and includes paintings from people visiting the Israel Museum in Jerusalem. Another important series is called “kibbutz courtyards” made during the years 2012-2017. Eight kibbutzim served as his inspiration for the hundreds of works, drawings, gouaches, watercolors, woodcuts and oil paintings, a very impressive body of work exhibited locally in 2019.

The quilt shows two bronze sculptures representing Don Quichote and his helper Sancha Panza by Israeli sculptor Dan Zaretsky (1938-    ) located in front of the Wilfrid Israel Museum at Kibbutz HaZore’a. The name of the kibbutz founded in 1936 translates to “the sower”, chosen to symbolize the members’ connection to the land. 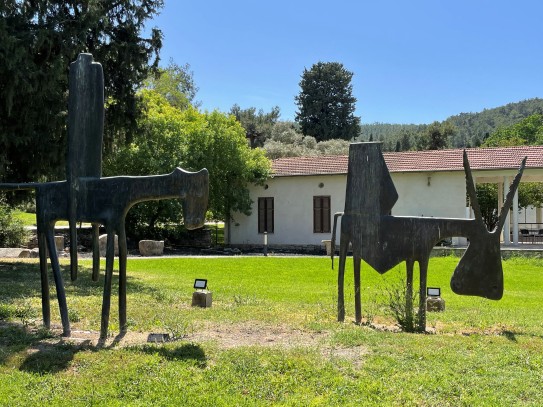