Inspiration: Images from a local pottery; its buildings and ambience. As the pottery industry declines, Middleport pottery for me still has echoes of the workers and the way they worked.

I live in the potteries and for a long time have wanted to create a series of pieces based on the pottery industry. I particularly like Middleport pottery which retains many of  the buildings and features of its Victorian origin, and over the years I have collected many images from around the factory. I think it still demonstrates the ghosts of the people who worked there and their working practices. For the ‘S’ challenge I started with an iconic sign that hangs at the entrance to the building and which starts “Strangers are not allowed on the Works”. I expanded my design to incorporate images of more old signs, some sinks from the factory washroom, and some saggars (which are the vessels which held the ware which was to be fired in the old-fashioned bottle-ovens).

I chose four images which contained the details I wanted, the transferred some of these onto white cotton using transfer paper, and printed some directly onto ExtravOrganza. I then collaged and bonded my selections onto a cream backing that has an aged look that suited the piece. I used a mixture of hand and machine quilting to pick put some of the shapes within the images. I used hand-stitching to add old uneven brick shapes, scattered throughout the piece, to echo the colours and shapes of the factory and its cobbled walkways. I added a few darker squares which are based on the ironwork at the top of the factory gates. On the right-hand side of the piece I quilted the shape of a bottle-oven (used for firing the ware), which still exists on the site. 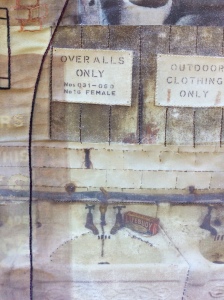