Corniglia in the Cinque Terra

Inspiration: The Cinque Terra, and more particularly Corniglia which is perched on an outcrop above the sea, and a rusting balcony seen during my visit.

Continuing with the snapshot idea this time I have placed the subject behind the balcony. I wanted to convey a sketchy feel to the background of the tightly packed houses in the coastal village of Corniglia, one of the Cinque Terra villages on the North Western coast of Italy. The photograph was taken from a footpath high above the village, I have increased the density of the colours as the day I was there the sun wasn’t shining. I love the way that this village is sited on an outcrop above the sea hence only the sea is visible rather than sky. The balcony was seen on a building along the way, I was drawn to its shape and the black and rusting metal…

The background was painted and then outline machine  stitched to give the impression of the varying colours and shapes of buildings, The balcony is made of black wadding which I have sprayed with de-colouration liquid which gave the mottle aged look that I was looking for. It was then hand stitched on to the background. 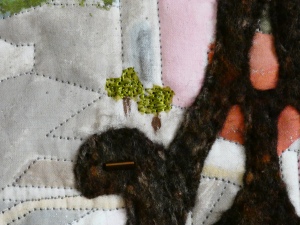